Check out the Updated Nigeria Army Ranks And Salary according to his or her rank and years of service. 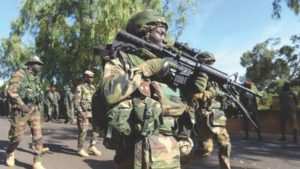 Contrary to the belief by most people that the Nigerian Army are being paid heavily, the opposite is the case as the Nigerian Army salary structure after increase in minimum wage reveals that these men who risk their lives to defend the sovereignty of Nigeria go home with stipends.
In this post, we shall expose how much officers and men of the Nigerian army receive as salary this 2021 and their history.
A Nigerian soldier is being paid according to his or her rank and years of service. The Nigerian Army’s basic function is to safeguard the nation against any sort of external aggression, support the interest of its citizens and country and it is known to be the largest in West Africa, however according to a report on globalsecurity.org most of the soldiers can perform a little more than the basic defensive operations.
The list below is a report seen as of February 2021.
Contents
1 Nigeria Army Ranks And Salary For None Commissioned Officers
2 Nigeria Army Ranks And Salary For Commissioned Officers

Nigeria Army Ranks And Salary For None Commissioned Officers

Highest Currency in the World 2023 | Updated